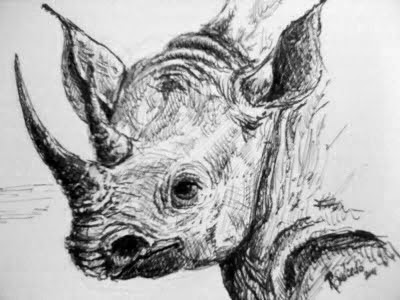 Say hello to my little friend, the quill! (ok, the fake quill, the calligraphy tip!)

[Wikipedia more or less states evidence of the following potential truths:
Did you know that the pen was first used for writing in ancient India? Yup! They used bird feathers and bamboo to hold the ink. The Egyptians used bamboo reeds to write on papyrus scrolls and they could also have been used in the First Dynasty (3000BC). The quill pen even wrote the dead sea scrolls.] Cool!

So, why do we say "Pen and Ink" instead of just ink? (Back to the feather). If you are using a feather or pen with a nib that must be filled with ink order to draw, then voila, you are using pen and ink technique! We use the name loosely, though, as my quill is often a pre-filled pen of India ink with a lid. When I create a piece, I do try to write the exact media I am using just for posterity (just India Ink, or Pen & Ink, Ballpoint pen, Prismacolor marker & India ink, etc).

To draw with ink, you don't have to get fancy; great works have been achieved using a ballpoint pen. There is no need to get fancy with the tools, unless you are a freak for art supplies, as I am.

Good ol' ink pen, yet another technique that arose from childhood, waiting in my Dad's office, to be precise. He worked as an Architect for a while in Chicago, and when we went to visit him, the few things that were always available to keep us entertained were pencils, pens and paper. What do you do with that? Ahem. (hint: It wasn't algebra.)

Today was a quickie Pen and Ink sketch, using a combo cross-hatch technique, and also scribbles (Hey, what do you want for 20 min?). You can achieve terrific precision with ink in the perfect linear fashion of cross-hatch, making perfectly horizontal lines and then countering them with a comfortable cross-hatch of your wrist at about 45 degrees, I guess.

Alternatively, you can achieve a liberating level of Fabulous with scribbles and rapid fire lines, which is the way that I sketch when I want to get something down quickly and I don't need it to be museum quality. Journal quality. I encourage you to try both.

If you have never tried calligraphy tips, treat yourself! Try pretending you are John Hancock and get ye a plume and try that. It's tough to control the flow of the ink, though, so I recommend writing with it over drawing with it. Light a candle and put on a puffy shirt to enhance your experience.

Today's Rhino bears likeness to yesterday's, and that is because when I got down to the studio tonight, I realized I had no reference photo, so I just quickly rendered (not all that accurately either) my #18 Ink Rhino from yesterday's #17 Graphite (pencil) Rhino.

Have a great night, see you soon,
Rebecca

Posted by smellyrhinostudio at 6:21 PM

Have something nice to say? Put 'er there!