You have my permission to have something lovely!

Public Service Announcement
On behalf of the Festival Arts World and all Artists everywhere!
It's OK, you are allowed to buy art and enjoy it! You have my permission, you are no longer relegated to some weird tribe of lookers who repeat time and again, "Wow, I want that!" ...but then never buy..

Imagine how awesome that would be to actually have in your hands and in your home!

Why not just buy it and enjoy it? You deserve it! It probably wont even cost that much! I routinely have people in my booth at the Saturday market LOVING a $15 print but don't want to "blow" the money on something frivolous, yet, they may be holding a $5.00 latte. Lattes are wicked great, I know, but ART is a lasting treat that you can really savor!

Support Artists and support handmade in the USA. Buy Art today!
You will cherish it for years, and it might help an artist continue to create. Your purchase will also help pay those tent fees so you can come and browse in the first place! Without sales, eventually artists will stop coming to the festivals that you enjoy and the festivals can't continue without us. We are paying to provide your fun, literally. Plus, where will you get funnel cakes and strawberry shortcake then?

It's not just a beautiful treasure you receiving, but we get to eat too! Just think, double bonus, you get something awesome and the artist gets to thrive and make more awesome art! 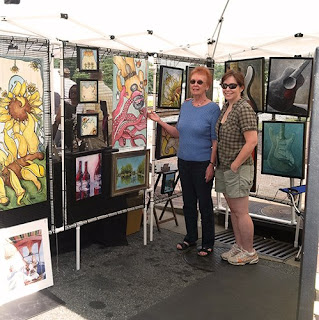 Most Saturdays, you can visit me at an open market! ... at the Marietta Square Artist Market 2nd and 4th Saturdays through November and at the Beltline at FarmArtket the first Sat. of every month through the Summer in Reynoldstown neighborhood of Atlanta!  Please contact prior to going to make sure I'm in town that weekend.

Have a nice day, Rebecca

You have my permission to have something lovely!

Posted by smellyrhinostudio at 11:18 AM 0 comments 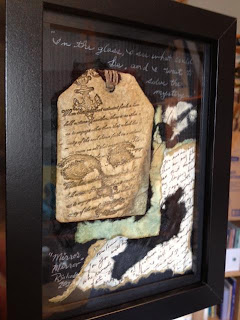 Happy Thursday, and here's to an unremarkable day!

So, it's been rough the past couple of weeks, dealing with my family emergencies, but I'm happy to report that after some crazy sleepless nights and hours upon hours (which added to entire days on occasion) of waiting in hospitals and doctor's offices, the road to recovery is looking optimistic, really good even!

During this period, I have had very little sleep, to the point of exhaustion and you know how you can make yourself sick that way!  I'm feeling upbeat today though, filling a few orders and feeling like things might return to a good clip by tomorrow.  It's a good thing too, because I have been invited to be a featured artist in an upcoming art walk downtown in June!  yay me! (and thanks Doog Becker, you are such a great supporter of the arts! xo)


This collage is another piece from my new (Insomnia) series inspired by waking and dreaming thoughts. Each component of the artwork is also hand made and embellished by me. This piece is called "Mirror Mirror", completely original collage art made from components that I also made; including hand made and painted and embellished papers (though not all the paper is made by me), Venetian plaster, polymer clay, jute, paint, glaze, and pencil.  100% art. and affordable!
This collage series will be available online in my Etsy shop and locally in Atlanta, Georgia at the Saturday Market in Marietta Square, 2nd and 4th Saturdays beginning April 13th and the Farmartket (Atlanta Belt line Saturday Market) 1st Saturday all Summer.  This series may also end up in a couple of boutiques and galleries and I'll let you know where they spring up if they do.


So, gotta go do a bunch of stuff now to play catch up, so enjoy the art and I'll see you soon,
Rebecca
(oh yea, don't forget to have a nice semi-normal inconsequential day!)

Posted by smellyrhinostudio at 10:45 AM 3 comments

Love. It's for everyone! 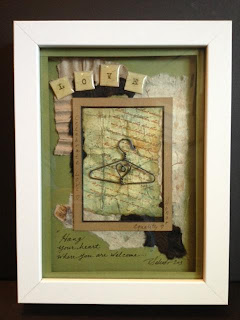 "Hang your heart where you are welcome!"
5x7 mixed media collage
Available on Etsy

This is another from my Insomniac's File, a collage series inspired by my moments of restlessness.  If you're lying in bed tossing and turning, you might as well just get up and do something, you may be surprised what comes of it!

I took some of these to hang in my Saturday Market booth this weekend and this one sold right away. Well, now they have decided to get a tiny personal tweak in there, so this one is actually available. It's just a sweet sentiment and a personal tribute to marriage equality.  There will be more with similar ramblings and the little hangers (I have a few more) and the lighter colors with white, natural and red frames.

Love. It's for everyone!

Posted by smellyrhinostudio at 5:05 AM 0 comments

Entries from the Insomniac File 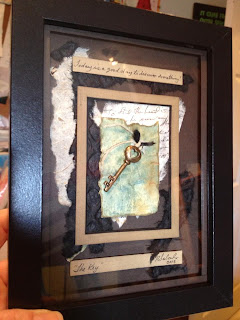 "It was a dark and stormy night in February..."

In January, I had asked friends of mine in one of my artist groups to participate in a friendly Valentine swap of any kind of art they chose to create for the occasion.  In all, about 5 of us agreed to participate.  Well, as I grew closer to Valentine's Day, I still could not come up with the inspiration for the little Valentine I would make for my randomly selected valentine, my friend Jules.  I realized that I may be the last one to get my Valentine in the mail, slacker.

I had begun to experience insomnia recently (too many cookies and espressos?) and hard as I tried, rolling over and over again in bed to the point of insanity was helping me sleep about as well as the caffeine after 8 pm! In these precious quiet moments creativity is stirring. I'm not alone lying there with my lucid dreams, imaginings, fantasies, nostalgic sentiments...smiles come easy, if only in my mind since the body hardly responds in those hours in between late night and early morning.

Finally, I got up figuring I would wear myself out with Law & Order or something on the TV. But, it was still pretty darn cold in early February and we live in a very high vaulted home that doesn't keep warm air in the living room, so after a momentary debate of how cold I might be trying to bundle up virtually with New York's detectives who handle the major case squad and their stories, I opted instead for my studio where I have a little space heater, lots of lighting and a radio.

The art supplies came out, feeling the paper give in to my tugging and tearing was pleasing to me. Glue got involved.  Writing integrated itself as it often does into my medley of artsy goodness and by 10 am I had created the beginnings of quite a few of these sweet little mixed media collages.  I felt good that I could make so much out of one sleepless night rather than lying like a mosquito on water.

These pieces have been waiting for a month for a framing solution, and I finally settled on adding a raised border to the outer edges, recessing the main image to create delightful little shadow boxes and voila, a new series is born.  "The Insomniac File"; dreamy sentimental mixed media collages. My awakenings, if you will, put on paper.

Entries from the Insomniac File

Posted by smellyrhinostudio at 8:01 AM 0 comments 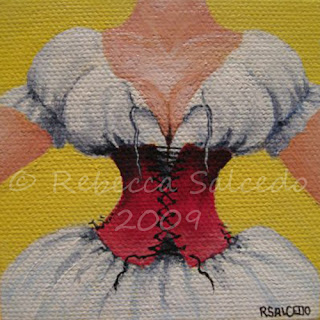 Posted by smellyrhinostudio at 6:17 PM 0 comments