Here’s a reprint of a blog post I made many years ago. Worth reposting, I think. 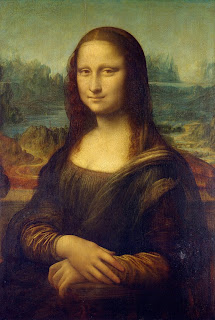 So a while back, I decided I might be able to make a few bucks by painting mini versions of the masterpieces. I've been working on these for a while, but I'm finally ready to show them to the world. My problem is I never know when to quit.

Here's my knock off of "La Jaconde", portrait of Mona Lisa, on 8x12 hardboard. I think my ability to paint her stems from harboring deep within me a bit of the subtly indecent seductiveness that she had. I think I did a pretty good job, but I kind of went crazy with the yellow ochre and could have toned it down a bit more, as she looks like she has hepatitis. Also, looking back, I wish I had made that green in the background less seafoamy.

Ok, I admire Gallileo's contributions, but DaVinci to me was the President of geniuses, a real all-American, a grand story teller, inventor and artist...treated the way an artist should be treated; (a real Renaissance man, like literally.) I can't get enough of him. I liked him long before the movie and the "Find the hidden meaning through a psychotic wave of conspiracy" fan club!

I don't tell many people this story due to the obvious display of vanity, but DaVinci died on my birthday, May 2, and I have been told that I am an incarnation of his brilliant soul. I know, it seems a little far fetched, but if you knew me, you would understand. Plus, I also design things that sink and can't fly.

Here's my knock off of "Lady with an Ermine", 8x10 hardboard.  Weird, people liked weasels back then too. 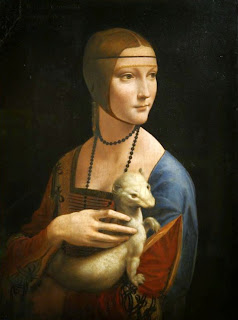 I had a hard time painting those muscular forearms like the original, because I kept thinking this was a bit overboard! They were really into muscular function back then. There was a large underground movement of the macabre, where they used to take cadavers and skin them and pose them to study the muscles. This was used for medical and artistic study, and was highly illegal. Nowadays, they collect and display skinned people and charge admission!  Gotta love capitalism for education you can't get at home!

Well, stay tuned as I prepare to recreate some more less than perfect masterpieces for profit and please let me know what you think of these. Really, though, your opinion probably means nothing to me anyway. (How was that? I was trying to be aloof.)

You know, DaVinci himself said art is never really finished, only abandoned...I know how he felt; literally.

Posted by smellyrhinostudio at 2:41 PM 3 comments

There's something in the pumpkin patch!

This sweet painting is inspired by a Stray Cats song ["...black and orange stray cats sittin' on a fence..."] and combined with my love of Autumn. These kitties seem to be enjoying a very special moment in the pumpkin patch at my favorite time of day: dusk. Something is in the pumpkin patch that has their furry little heads tilted. I wonder what it could be? Well, the rest of the story is up to you!

I thought I could use a sweet decorative favor to adorn a wall in our new home this lovely harvest season. You can enjoy this sweet print, too, hot off the press, for a very special fall fundraiser. My studio needs a new festival display tent so that I can continue to meet you all on the streets around town next year! I'm offering these prints for only $40 and with each purchase, you'll receive a very special little surprise gift from me!

Title: "Something in the Pumpkin Patch!"
Print size: 9x18"
This is a giclée print on archival paper with long lasting rich pigment inks.
Prints come rolled in a tube and shipping is free.

If you'd like to get a super sweet print for your home, click here to => Purchase a print!

Thank you for visiting me at the many festivals around town and the Marietta Square (Saturday) Artisan Market for 5 years now, and thank you for supporting my art! I can't wait to see you next year in my new tent!

Have a wonderful and safe Halloween!
It'll be my 4th wedding anniversary, so I'll be celebrating!
Regards,
Rebecca Salcedo

Posted by smellyrhinostudio at 1:53 PM 5 comments

I hope you dance!


Today is good day. Fall is coming, I just know it. I can smell the cooler air (if only in a distant memory.) It has been far too hot this Summer. I'm done with melting makeup and wearing what I can to stay cool. It's time for fashion, baby. I feel like dancing!

In a couple of weeks, you can find me if you're on Atlanta's northeast side, namely, Norcross, GA. The Norcross Splash Festival is October 1st and 2nd. It's a wonderful show full of plenty of quality artisan pieces. Worth the drive!

But, if you're on the northwest side and just hate to drive, then visit our booth in Marietta Square for the Marietta Square Artisan Market on Saturday, September 24th. (I just call it the Saturday Market, but it's so much more!) I'll be there for all the remaining markets this year.

Have a great day,
Rebecca

I hope you dance!

Posted by smellyrhinostudio at 2:50 PM 0 comments


I'm excited. I've been invited to be part of a new gallery. This one will shine the light on my florals and give me some sunny exposure in town, in my favorite neighborhood, Decatur.  If you find yourself in Decatur in the near future, pop on in to the Decatur Fine Art Gallery and see wonderful works by local artists and craftspersons, and visit my little wall of Ethereal Flowers. Opening next month in East Decatur Station on E. College Ave.  See you there August 8th!

Have a nice evening!

Posted by smellyrhinostudio at 8:07 PM 2 comments

All journeys come with some mystery


She travels these woods daily, but she never reveals a path with her reticent footsteps. She always feels she has company. The forest climbs to meet her. The trees aren't alone in their longing to be near her, and they, too, will wait for her return.

All journeys come with some mystery.

This painting is available at the Marietta Square Artist's Attic.

All journeys come with some mystery

Posted by smellyrhinostudio at 5:59 AM 3 comments